I talked with some students and their seemed to be a few that couldn't make the final, so I think I am just going to decide to make it that the final project is due on Monday the 8th (MWF class) or Tuesday the 9th (TR class) by 5:30 pm.  But you do not have to come to class if you have already finished and turned it in.

If you wanna use the time on Monday/Tuesday to  work in the lab, go ahead.  Just get it in by 5:30.  I will be around from 3 to 5:30 if you have any questions about anything.  But to repeat, if you have turned in your project (via sending me a Youtube link) , you are done, you don't have to come on Monday or Tuesdat.

feel free to message me if you have any questions
Posted by Prof. Ireland at 12:02 AM 9 comments: Links to this post

Posted by Prof. Ireland at 2:17 PM No comments: Links to this post

Sites to get sound effects - homework for next week, collect at least 10

Posted by Prof. Ireland at 7:05 PM No comments: Links to this post

Working with self- or group- shot footage that we will produce in class on Wed(4/26) or Tue (4/25), you will work to explore the idea of the uncanny and the human body through time-based, image manipulation.  You will shoot a short video of yourself in front of the green screen then compose a short video/animation based of the theme of the uncanny. This project is purposefully open to interpretation.

Uncanny
strange or mysterious, especially in an unsettling way.

"an uncanny feeling that she was being watched"


A better definition can be found here.

This can involve any number of tactics, from green screen/layering to re-colorization to particle effects. Your final product should be a 20 (minimum) second HD animation which demonstrates some aspect of the Uncanny. This project can and probably should be abstract in every way.  Do not concern yourself with narrative, just use symbols, video footage, color, shape, rhythm, and sound to define your idea.  Use instrumental sounds and sound effects (no singing) to create meaning or rhythm.  Favorable grades will be earned by those who create an animation which demonstrates both an understanding of the tools within AE as well as an understanding of the forces at work in critical discussions of the Uncanny.

Step 1: collect audio tracks and ideas for class, do so before step 2.
Step 2: film short scenes in Photo/Mocap lab in Grant building on Wed  4/26 or Tue 4/25.
Step 3: edit your compositions

Videos must be edited to H.264 encoded Mp4 files in Adobe Media Encoder, then uploaded to Youtube, just like Project 7.

Use a cinematic montage structure rather than a traditional narrative structure, and a montage aesthetic (layering/fragmenting/compositing different imagery)

Use your self in a self portrait, realist manner, or use a sillouhette to hide your identity.  You may use your full body, or selected parts in the final images.  You may also use props during the green screen demo.

Due to the recent flooding....

Due to the recent flooding in parts of the art building. there are no classes allowed in the art building on Tuesday April 18th.  Any class you have elsewhere on campus is still in session...
Posted by Prof. Ireland at 5:21 AM No comments: Links to this post

Senior Exhibitions start this week, through 5/8 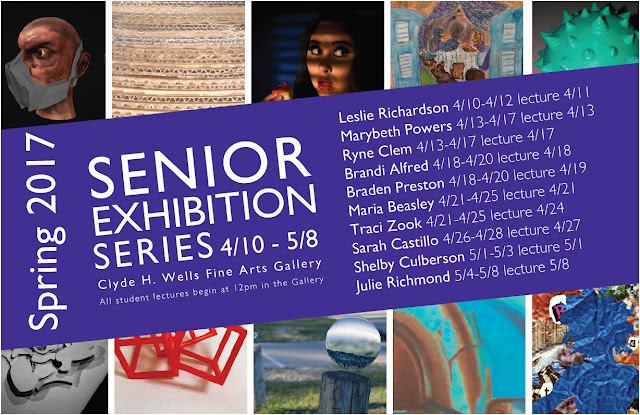 Starting Monday, April 10th-May 8th, the Art and Digital Media Studies Senior Exhibition Series will begin. All of the Senior Lectures will be at 12 pm in the Gallery of the Clyde H. Wells Fine Art Center. Attend the lectures, support your seniors!
Leslie Richardson: April 10 -12 with lecture on 11th
Ryne Clem / Marybeth Powers: April 13-17 with lecture on 13th (Mary Beth) and the 17th (Ryne)
Braden Preston / Brandi Alfred: April 18 -20 with lecture on 18th (Brandi), and 19th (Braden)
Maria Beasley / Traci Zook: April 21 -25 with lecture on 21st (Maria) and 24 (Traci)
Sarah Castillo: April 26 -28 with lecture on 27th
Shelby Culberson: May 1-3 with lecture on 1st
Julie Richmond: May 4-8 with lecture on 8th
Posted by Prof. Ireland at 10:16 AM 3 comments: Links to this post

Artists we looked at